“What would you say if I said I hadn’t seen Evil Dead 2 yet?” - “I’d think you were a cinematic idiot and I’d feel sorry for you.” 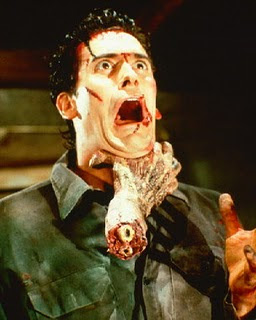 
Saturday night in screen one at the Cameo Cinema, Edinburgh was one of those special film outings: eagerly anticipated, enthusiastically enjoyed and remembered fondly: Sam Raimi’s 1987 horror comedy, Evil Dead 2. I do feel sorry for anyone who wasn’t present to appreciate this fantastic piece of cinema.

The title of this post refers to the scene/passage in High Fidelity when Rob tries to elicit advice from Barry about the likelihood of a person seeing said film after they had said they hadn’t seen it yet, (actually a thinly veiled analogy for whether Rob’s ex-girlfriend will sleep with her new man). During the screening of Evil Dead 2 at the Cameo I couldn’t help thinking of Barry’s description of the film; “it’s so funny, and violent, and the soundtrack kicks fucking ass!” This is indeed true, I can’t think of a better way to summarise the films cult appeal, but the sheer pleasure that myself and the other cinema goers got from seeing it on the big screen (some for the first time, lucky swine’s!) warrants a more in-dept discussion of the many instances of greatness that the film has to offer.

For starters the film was screening at midnight on the eve of Halloween so the large audience in attendance were bound to be the kind who have seen it several times before and maybe own it on DVD, therefore there was a level of familiarity with certain scenes in the film. To begin with the mere presence of Bruce Campbell on screen as reluctant hero Ash, garnered a palpable sense of good will from the crowd, laughing during the re-cap on Evil Dead when he reassures his girlfriend Linda that they will be safe for their romantic evening in an abandoned cabin in the woods. A personal pleasure for me was the transparency of the technology: the magnetic wavy lines visible due to presumably a film-to-video-to-digital transfer. Knowing that this was the best copy available somewhat added to the cult nature of the screening.

For those unfamiliar with Evil Dead 2, I’ll give a brief plot synopsis: man unleashes evil from beyond the grave and defends himself and other temporary inhabitants of a cabin in the woods, from the relentless onslaught of possessed demons and (normally) inanimate objects. This doesn’t sound like it would be particularly funny, but Raimi, Campbell et al managed to strike the right balance between horrific violence and slapstick comedy (more on slapstick later). Raimi literally employed any and every camera technique you can think of to enhance the otherworldly nature of his subject matter. When I say camera movement, I don’t mean simple dolly or zoom shots, but the actually strapping of the camera to ropes, planks and body parts in order to get the right shot. When Ash wakes up, face down in a puddle in the woods at dawn the shot is framed from above, as though observing Ash from the tree. Suddenly the camera spins and pulls away, in a movement that thematically mimics the twisted events of the previous night. Another inspired (or perhaps sadistic) shot is that of Ash being dragged backwards through the forest, being thrown in the path of branches and bushes. For this shot Raimi tied Campbell to the back of a truck facing the camera, and had him literally driven backwards. In order to have the right amount of foliage, Raimi had spare branches thrown at his lead actor; throughout the film Campbell shows amazing willingness to be put through a veritable mill of tough stunts and physical comedy.

One particular scene involving such physical comedy is what has become known to fans as the “Who’s laughing now?!” scene. Set in the kitchen, after Ash’s now possessed hand has attempted to strangle him, it sets about trying to kill him by any means necessary, giggling demonically throughout. The scene is pure slapstick, as Campbell smashes plates off his head and throws himself to the floor. Raimi has expressed his love for The Three Stooges, but the scene also resembles both Laurel and Hardy type pratfalls and Loony Tunes cartoons, demonstrating the films tone perfectly – the exaggerated performance in reaction to horrific events: the logic of, you have to laugh otherwise you’ll cry. The commitment Campbell shows to throwing himself about is on par with Donald O’Connor’s famous clowning in Singin’ in the Rain when he sings ‘Make ‘em Laugh’.

Evil Dead 2 demonstrates a clear character arc in the transformation of Ash from traditional alpha male hero, to well-adapted demon slayer. As with the classic action film, our protagonist must overcome escalating challenges in order to save the day, and in the process he changes physically. Initially dressed in blue denim shirt and jeans, Bruce Campbell’s prominent chin and dark hair signal his seemingly Hollywood leading man masculinity. Once he has experienced the trauma of killing his demon girlfriend, and taking a chainsaw to his own hand, his appearance is understandably rough around the edges with ripped shirt and bloodied face. Eventually the horror of the evil dead expresses itself more forcibly on him, as he armours himself, replacing his hand with the chainsaw that claimed it, and eventually strapping a sawn off shotgun to his back. The final change comes when Ash is faced with evil made physical, and the shock creates a streak of white hair above his ear. Since the release of Evil Dead 2 and the sequel Army Of Darkness (1992), these different manifestations of Ash have become subjects for collectable dolls, making available to buy: ‘Ash’, ‘Evil Ash’, ‘Medieval Ash’ and ‘S-Mart Ash’, further capitalising on the films cult appeal. The term ‘cult’ is perhaps too big to discuss fruitfully here, but it goes without saying that the screenings time and place seem to confirm its status. Only the fans or extremely curious would venture to the cinema at 11.15pm on a Saturday night to watch a horror-comedy.

Time is a playful element in Evil Dead 2, as Ash sees a figure remarkably similar to himself in the pages of The Book of the Dead, prophesising that he will fall from the sky to save the people of medieval times from the evil that pervades their land. This page from the past predicting Ash’s future means that his adventure won’t be over after evil has been overcome. Instead the audience gets a hint of Army of Darkness at the end of the film as Ash is framed centre - having shot a winged beast out of the sky the armour clad knights cheer him as their saviour, to which Ash’s response is that brilliant movie cliché, the hero’s wail: “Nnoooooooooooooo!”

All this made for pure joy in the cinema that night. A collection of film fans familiar enough to bring a certain amount of participation to the experience: cheers and whoops during the montage of Ash armouring up for a fight, culminating in the much imitated and parodied (see Spaced, TV, Edgar Wright) “Grooovy” line. Just as with the screening of Fred C. Newmayer’s Safety Last! Starring Harold Lloyd at the Filmhouse earlier this year, this was for me, event cinema. The particularity of a single or limited screenings, coupled with an awareness of the rarity of its appearance on the big screen. I couldn’t help thinking of Sontag’s lamentation The Decay of Cinema (1996), an essay in which she decries the increase of television and other viewing options. In it she claims that in order to truly experience a film you have to be ‘kidnapped’ by it, taken over by the size of the screen, the darkness and the communality of the auditorium. This was the feeling I had seeing Evil Dead 2. Despite the obvious special effects: the visible seams in Ted Raimi’s costume as possessed granny Henrietta, the far-from-seamless transition between actor Denise Bixler as Linda and her latex counterpart. None of that was important; in fact it was refreshing not to be watching a CGI heavy, uncanny, overblown farce. Or as Nick Roddick in Sight and Sound recently wrote, about watching Bullit, (Dir, Peter Yates, 1968) ‘The result is far more exciting than the thrill-a-minute movies that have cluttered up this summer’s schedules’.

Next time you see a late night or one-off screening scheduled at your local cinema – actually go to it! Don’t just think about it, do it, you will be rewarded for your enthusiasm for cinema.