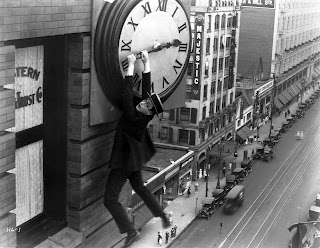 I haven't blogged in a while, recent essay deadlines have kept me away from sprawling notes about the cinema, but tonight I write because I feel impelled to.
My reading of late has tumbled into the subject of cinephilia, having looked at Susan Sontag's The Decay of Cinema, reading Nick James's editorial in Sight and Sound this month seemed unusually prescient to my studies in general, one of those moments in research when you feel strangely clued in to current debate. I've also been thinking (and talking) a lot about choice. Mark Cousins recent column on the subject in the aforementioned magazine posed the question of how we are ever to decide what to watch, when so much is available to us.
If cinephiles aren't 'as special as we like to think we are' (James) and we have too much choice, is one cinematic experience (dare I use the word) de-valued in relation to the next? I may say that I saw a rare print of a Renoir, but that will be countered just as quickly by "ah, but did you see The Limits of Control?" How can I begin to convey to you how wonderful it was to see Safety Last! at the Filmhouse tonight?
This is what I really want to talk about. I headed out to the cinema with the Edinburgh sunset behind me and a spring in my step. I always get a self-conscious feeling when I walk about listening to music on my Walkman, I'm aware that tuning in to my own private soundtrack is akin to scoring my own movie in real- time, but as everyone seems to have this experience I'll let that go for the moment. I strode up the hill to the cinema in anticipation of seeing a classic of the silent age, and having bought my ticket, chatted to the usher and found my seat I looked back to check out the audience and the projectionist's booth.
The film has been restored from an old print and it was the new 35mm print that I saw projected in Cinema 1 tonight. Evi (the usher) told me that she doesn't like the digi-beta copy they have been screening in the smaller theatre, and this information further enhanced my excitement (or simply the myth) of the film experience.
Having seen not enough silent films and never having seen a Harold Lloyd comedy, I could only imagine how my expectations would be met. Knowing that Lloyd et al did all their own stunts, no wires (that I could see) and no stunt doubles was simply amazing to see. The climatic climb up a sky scraper with the famous clock scene was remarkable, and the audience was laughing and letting out sighs of fear with me! Harold Lloyd had such an expressive face, and each gag is so well timed, I don't want to gush too much so I'll just say it was a joy.

This is the crux of how I'm feeling at the moment, I don't feel I can put my finger on what it was to be in the cinema tonight, watching that particular film, call it magic if you like (maybe I will come to that) but when everyone clapped as the curtains closed on the screen, I felt present with my fellow film fans, and elated that each of us was still smiling and chuckling. Maybe you have had a similar experience, when you really felt the communality of the film experience? I had the same thing seeing Singin' in the Rain in the same screen and there's really nothing like it.
I'm glad I chose to see Safety Last! tonight, it was a tough decision, but it paid off, the reward of collective 'cine-love' as Sontag would call it. I wonder when I'll feel the same way again?
Posted by 'Meta' Harri. at Tuesday, April 13, 2010 3 comments: