Adventures at the London Film Festival 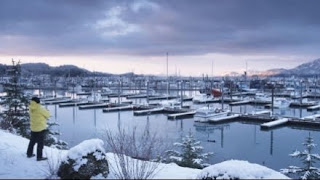 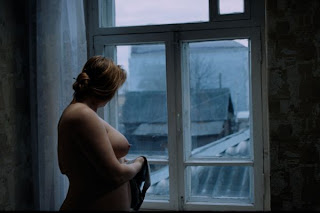 
Last week I boarded the train and headed southwards to England’s bustling capital to check out a selection of films screening at the festival. Choosing films based on the websites description is always a difficult enterprise as even the best recommendations are tainted by the bias of the individual programmers who selected them. They love the films, but will I? Then again, the spirit of a festival is to take a chance and see something you wouldn’t ordinarily see - relish the risk, rather than playing it safe. My choices were based on an attempt to not see American independents; I’d seen a lot of those at the Edinburgh International Film Festival. As much as it pained me turn down the chance of seeing Will Ferrell play it straight in Everything Must Go (Dir, Dan Rush) I was rewarded with some quietly brilliant films. In the end my choices turned out to share similar themes, perhaps a result of the inherent fine-tuning that my tastes have undergone.

Undergoing the festival triple bill is a pleasure that comes around only once in a while for me, so on Friday I opted to start my day at the Vue Leicester Square, wander over to Curzon Mayfair and end at the ICA. First up, a Russian film directed by Aleksei Fedorchenko about the traditions and rituals that have survived from the Merjan folk culture, which emerged at the former Finnish enclave that was incorporated with Russia during the rule of Ivan the Terrible. Silent Souls was ostensibly a road movie, following Miron, the director of a paper factory in Neya, as he and his friend Aist set out to give his wife a traditional burial at the place where they honeymooned. Along for the ride are two buntings, the birds which Aist carries with him on their journey.

Wonderfully paced and beautifully shot, every phase of the films narrative and composition gave primacy to the ritual processes of their mission, (of sorts) to return the body to the water. There was a tenderness to the cinematography that lent itself well to the humanist activity of these two men, carefully carrying out the preparations and ultimate cremation of Miron’s dearly loved wife. Some of these were entertainingly bizarre, such as their tying of string to the pubic hair, as is the custom to prepare a bride for her wedding, others simply showed the respect and preservation of both the Merjan rituals and the integrity of the marital relationship, with it’s emphasis on the coming together of two individuals.

The buntings that Aist carries seemed to serve as a representation of the audience to an extent, quietly observing the rituals of a fading culture and inevitably effecting the actions of the men, just as any observational perspective cannot help but influence the conclusion.

At Curzon Mayfair I saw Love Like Poison, a French film directed by Katell Quillévére about a young woman struggling with the contradictions of her Catholic family, separated parents and burgeoning sexuality. Again, beautifully shot, the film focused on fourteen year-old Anna (Clara Augarde) and from this perspective showed the ill-defined boundaries between youth and adulthood. Much like Miranda July’s Me and You and Everyone we Know (2005), the notion of the child as capable of understanding sexuality more competently than the adults was at the fore as Anna encounters both her granddads desire to feel the pride of his handsome youth, and the affection from some-time suitor Pierre (Youen Leboulanger-Gourvil), who politely celebrates Anna’s fast developing body. Despite the familiarity of the themes explored by the film, the directors assured direction ensured a freshness to the narrative, and though there was perhaps too obvious a connection to Little Miss Sunshine (2006) in it’s portrayal of the anarchic grandfather exerting a last rebellion through his granddaughters public reading of a dirty poem, this only exposed the cultural differences, however maintaining the comedic affect.

Lastly on Friday evening at the ICA I saw Sandcastle, a film about a family in Singapore, fractured and coming to terms with personal and political history. Directed by Boo Junfeng, the film centres around En (Joshua Tan) an 18 year-old awaiting military conscription, who discovers the hidden alternative past about his parents, when his ageing grandparents hint that his late father was more radical than his repressed mother has led him to believe. Prior to the screening, actor Joshua Tan introduced the film and asked the audience to consider the film more as a coming of age tale than being deliberately political. Nevertheless the emotions felt by En as he discovers more about his own identity are effectively balanced with the gradual revelations of his parents’ involvement with anti-conformist protests. The film is also very touching and funny, particularly about the generational gap that can often come with regard to old and new technology. En’s look of disgust at the PC his Mother’s boyfriend buys him while he’s waiting for his Mac to be repaired brilliantly captured the sense of the frustrated adolescent, who feels like they know more than their elders.

In parallel with En’s journey of self-discovery is that of his mother’s (played by Elena Chia) facing up to the person she once was, and the new strict etiquette that she lives by. The scenes between mother and grandmother were particularly affecting, as the younger generation learns to let go a little, and that responsibility doesn’t have to be a burden based on tradition and respectability. I really enjoyed the tone of the film, which was meditative at times, and paced to gradually reveal what En sets out to discover.

My fourth and final film at the festival was The Nine Muses, perhaps an essay film, though it could be considered docu/fiction too. The unclassifiable nature of the film was one of its many pleasures. Directed by John Akomfrah, this was a re-telling of the mass migration to post-war Britain, combining elements of archive film, quotation from The Odyssey, literary readings (as voice-over) from such sources as Beckett, Dickinson and Shakespeare, music extracts that ranged from pop, through tribal to classical, and newly shot footage that symbolically demonstrated the feelings of migrants on their arrival in Britain. Slow in pace, but tightly edited, the layering of images, voice and music conveyed the overall theme of loss, explored via memory. Akomfrah, who attended the screening and discussed it afterward, described his reasons for the using the extract of ‘The Nine Muses’ from The Odyssey. Intending to weave the narrative of the migrant’s journey, Akomfrah argued, based on not only testimony’s gleaned during research but his own family’s that this journey is literal, emotional and figurative as the individual adjusts to the new climate, culture and questions of assimilation or appropriation of new norms and values. I felt that the decision to create a tapestry of cultural influences combined with archive television (which included interviews with migrants and angry British natives) was a more meaningful and lyrical method, than a straight documentary might have been.

Akomfrah talked of his desire to understand and make use of the literary texts that had come to influence him, saying that he loved Beckett, but why? And how had this influenced his previous work? With its strong focus on memory and trauma, The Nine Muses clearly answers these questions, demonstrating the fluidity and variety of culture and influence.

Overall, I enjoyed my time at LFF; somehow I managed to see four films of high quality that expressed to me the important themes of memory, family, time and place.

A Slacker's Review: Scott Pilgrim Vs The World. 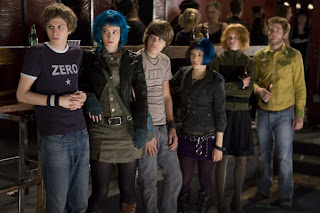 Edgar Wright continues his focus on the slacker as protagonist in this pastiche of video games, the Indie music scene, super hero movies, and generally everything pop cultural. Just as Tim and Daisy in Wright’s Spaced (TV series, 1999-2001) were twenty-something’s, portrayed as lazy, partially employed, preoccupied with ‘Scooby Doo’ style adventures referencing everything from Pulp Fiction to Grange Hill, so too do Scott and his friends do very little between each bout of battle of the bands, with their own Sex Bob-Omb and as Scott faces each of his opponents. The plot is simple: Scott Pilgrim (Michael Cera) is twenty-three, between jobs and living in Toronto with his gay roommate, Wallis Wells (Keiran Culkin). He’s dating a seventeen-year-old catholic schoolgirl called Knives Chau (Ellen Wong) but really wants to abandon his ‘fake’ nearly platonic relationship for the new girl in town, Ramona Flowers, (Mary Elizabeth Winstead). His problem is that in order to do so, he must defeat her seven evil exes, who are all intent on destroying Scott and controlling the future of Ramona’s love life.

Bryan Lee O’Malley’s original graphic novels, on which the film is based, are witty and energetic, drawn with an awareness of Manga-style naivety and Indie-comic book cool. The film follows the aesthetics of the books to the letter, mostly mimicking exact frames and panels, in some scenes the transfer from page to screen adds little, as in the ownership diagram in Scott and Wallis’s apartment, (though it must be said that adding little isn’t to be taken negatively, it simply demonstrates the brilliance of O’Malley’s work). In other scenes Wright really displays the seamlessness of the adaptation to the screen medium, the fight sequences are deliriously entertaining, blending video game choreography and bombastic cartoon-like action (see Scott being thrown 100 metres in to air by Lucas Lee (Chris Evans). Fans of Cera might be tiring of his repeat performances as the shy, awkward, nerdy but nice guy in everything from Arrested Development to Nick and Norah’s Infinite Playlist, but in Scott Pilgrim Cera’s character has an unintentionally oblivious edge, and he sticks closely to O’Malley’s creation. Scott is not a perfect gentlemen, he’s lazy and lacks compassion for the relationships he has left behind including the drummer in his own band, Kim (Alison Pill, continuing to be impressive since Pieces of April), his ultimate victory comes from realising how he has wronged the people in his life. That sounds very saccharine when summarised in such a way but Wright avoids sentimentality through the clever distance that the film’s intertextuality provides. In fact, despite the call to action that Ramona’s exes provide for Scott, it is arguable that his innate slackerdom remains intact even as each victory is won, by the use of exaggerated video game fantasy sequences, which literally transforms Scott and his friends from ordinary inactive young adults into kick-ass super fighters. By defining action in these terms, both O’Malley and Wright have continued to characterise both the 20th and 21st century twenty-something as entrenched within the pop-culture they view and participate in. Just as in Spaced, Tim’s paranoid anxiety over his ex-girlfriend is played-out as a Resident Evil style zombie shoot-em up, or Daisy’s futile efforts to remain gainfully employed take her to a restaurant kitchen institutionalised by the Nurse Ratched-like manager, Scott moves from semi-active, bass-playing platonic boyfriend of a high-schooler, to hero of the beat-em up, collecting coins as each evil ex is defeated. The problems of the video game playing slacker can only be solved when made equivalent to the pop-culture that they absorb.

All this is of course thrillingly entertaining, right down to the smaller comic touches, such as Julie Powers (Aubrey Plaza) ability to self-censor with an black cross appearing over her mouth when her anger at Scott elevates to cursing. Each of the actors is excellent, but Kieran Culkin, Ellen Wong and Anna Kendrick (as Scott’s sister, Stacey, rated ‘T’ for teen) deserve special mention for pretty much stealing the show from Cera.

Scott Pilgrim Vs the World is gleefully funny, with Wright proving that further to Hot Fuzz, he is more than capable of handling proper action and shit.