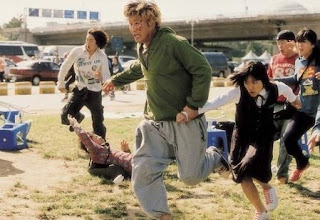 I have been (along with my fellow students) going through a process of articulating the why's and how's of our chosen areas of research. In fine tuning a proposal for my dissertation I have become frustrated in continually 'pointing' towards theories and work done by others, that I am not yet an authority on. The question that leaps from that is of course, will I ever be an authority on anything?! In being bogged down with this I sought solace in the Cinema, the place that is of course the inspiration and fascination that fuels all my interests and passion to begin with. I went to see Up in the Air (Dir, Jason Reitman) on Tuesday afternoon, a time of day I particularly like to be in the cinema because the auditorium is usually very quiet and I get to be alone with the screen. It's a strange kind of worship, one that I related very much to Terrance Davies poetic description of screen in his film Of Time and the City (though the cinema is a presence in most of his previous work too).
I don't really want to discuss the film; I liked it, though I can place it in a category of 'epiphany' movies when the central protagonist has some revelation about the way they should be living their life. In this case demonstrated with cliché and musical montage! Being in the cinema though - that was lovely, like going home and getting into slouchy clothes. Each screen is different though and I was in cinema 1 at Cineworld, which is laid out as a traditional half collosseum, so that when I sat in the middle seat half way down the rows I was facing straight on with the screen, unlike in other cinemas when some area of a stage or exit sign can be seen in relation to the screen. Relating directly to it's surface, I could see a few scratches on the screen too and this was something that almost improved the experience for me. Far from ruining the illusion that is highly sought after in film, the imperfection of the projected experience had the effect of bringing me closer to the mechanics of the cinema, appreciating all the combined elements that comntribute to the place I prize so highly.
This is a comfort, as I seemed to conclude, a year and a half after one of my film professors asked us new students whether we thought studying film will ruin it for us; that in fact I feel enriched by a more full awareness of all that encompasses the ' thing' that is film.

Sexy Beast and The Host I watched as a double bill on Wednesday night, the former being a film I had intended to watch for a long time and the latter being one of my favorite films. centers around the Park family, and particularly Gan- Du, whose daughter Hyun-Seo is captured by the chemically mutated beast that emerges from the Han river one sunny afternoon. Unlike other monster movies that build tension by leaving the revealing of the creature to the second act, in The Host, the camera loves the giant tadpole/slug beast, following it as craches around on land terrorising people as the laze on the grass enjoying the sunshine.
Gan-Du is first introduced to us, asleep in the food kiosk owned by his father. He is a slacker, lazy and inept, his hippyish blond hair marking him out as a non-conformist to the action of everyday life. It was with this perscpective that I re-veiwed The Host on Wednesday, focusing on the characterisation of Gan-Du, his father, brother and sister.
Despite being portryed as lazy in the first instant, Gan-Du is quick to act when the beast begins to trample over the peaceful inhabitants of the riverside. Alongside an American man, he picks up slates and a traffick sign to attack the creature, even after he witnesses its ferocious roar as it devours both an overweight civilian and the American hero.
It is the tension between action/inaction and comedy/tragedy that makes the film such a captivating watch. Gan-Du's brother, Nam-il is derided by their father for failing to acheive success despite being college educated, something that Nam-il has a sense of bitterness about also, "I sacrificed my youth for the democracy of this country and they won't even give me a job".
Combined with this, Gan-Du's sister, Nam-Joo is a competitve archer; we see Gan-Du and Hyun-Seo watching her compete on television before the creature attack. Her problem however, is the inability to let go the arrow in time to make a winning shot; she leaves the competition with a bronze medal, for being too hestitant to act. Hie-Bong, the father, attempts to uphold some sense of honour, even if this expresses itself in trying to bribe officials in order to escape and rescue Hyun-Seo.
The family's ecape from quaratine is set to jovial acordian music, a tone of farce and comedy, rather than tense action scene, in keeping with a previous scene in which, greiving at the loss of Hyun-Seo, the family collapses on the floor wailing and weeping. It's tragic, but then somehow it all becomes hilarious, as though one kind of excess simply mutates into another.

In the final scenes, our slacker and inactive family members, now separated are called into action for a showdown with the beast. Each of them is allowed to overcome their previous failings; action instead of inaction and all fuelled by their collective incentive to avenge Hyun-Seo.