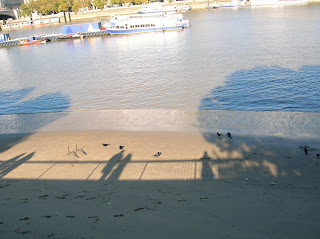 I woke up this morning full of thoughts about what I might write on this blog today. My enthusiasm for research and learning is at a very high level at the moment, especially after I spoke to my professor about my dissertation ideas and was told that they weren't awful! That was all I really wanted when I imagined how our chat would go, I was simply hoping that I wouldn't be told to forget all the research and thinking I had done so far. In some ways I feel as though I'm setting out to solve a problem, or at least resolve the issues that have been concerning me for the past however many years.
Thinking is all I seem to do at the moment, and this week it may have been to the detriment of my reading. I had plenty of plans for reading but they seemed to get sidelined somehow as I thought through the main themes of my research.

I've only just begun to read the texts suggested by my professor but their mere presence in my 'office' is like a calming force, re-affirming my interests and expressing far more articulately some of things I think about cinema and screens. For example, here is an extract from Anne Friedberg's The Virtual Window,
'As the beholders of multiscreen "windows," we now receive images - still and moving, large and small, artistic and commercial - in spatially and temporally fractured frames. This new space of mediated vision is post-Cartesian, postperspectival, postcinematic, and posttellevisual, and yet remains within the delimited bounds of a frame and seen on a screen.' (7)

For some bizarre reason I was thinking about this whilst watching Jurassic Park last night. Laugh all you like, but the technology to be seen in that blockbuster from way back in 1993, like many films, demonstrates the development of user interfaces that are designed to extend human vision. The scene in which Lex, a 'hacker' taps into the parks control system to turn the phones and door locks back on, first of all induces a giggle when she utters the line, 'this is a UNIX system- I know this!' but also displays a nice graphic that shows the viewer how Lex is able to 'see' the whole of the park all at once and simply click each icon to get progressivly closer to the location of the right control. For all that the graphic may be an unrealistic depiction of what a real system such as that might look like, the scene closely resembles an earlier one in which Hammond attempts to guide Sadler via a 'walkie-talkie' (I love that name) through the corridors of a bunker, using a blueprint map. Hammond acts as her eyes, and talks her through what he can see, in theory what she should be encountering in the bunker. After another dead-end is reached, good old Malcolm tells her to simply follow the pipes. Hammonds' vision, transferred to speech and mediated throught the radio transceiver is not adequate to guide Sadler and instead she relies on her own vision, likewise Lex's vision of the park is extended through a representational graphic that is mediated through the screen of the computer, being able to 'see more' she can control the environment in which she exists. That's the theory anyway.

In terms of what Freidberg is talking about, and continuing my thoughts from last week, we can think of mobile phones and the ever present iphone and soon to be released Googlephone, as devices that we are constantly in touch with that which enables us to, 'see more'. Not only do we have graphics to guide us through text mesages, music stores and a connection to the internet allowing us to get information or images wherever we are, the aspect I find so facinating is the digital camera either by itself or on the moblie phone.
You will have done this at some point and if you haven't you might have seen someone doing it, but I'm always interested in the people who record videos of their experiences as they are happening, holding up a frame through which to view that which they can see and feel in that moment. I see this a lot at gigs and concerts, people holding up their cameras/phones to get a shot of the band. I wonder if that person would have the same experience if they had surrendered their recording device and merely relied on their unmediated senses of vision, hearing, touch etc, to experience the event.
The video they record may be for the use of an absent friend, and it will be sent as information to that person, and seen through one of the many 'windows' Freidberg lists. There just seems to be a fear that if we don't capture our experiences (and this is a reference to Sontag), they won't have really happened. We want to be able to look again, after the event and examine what our experience was, to be somewhat outside ourselves, looking in.

The photograph, or rather image of a photograph above, I took when I was on the Southbank in London for the LFF. I was by myself and taking snaps of passers by in the bright morning sunlight, my attempt to capture an image of what it was like to 'be there'! I've posted it here because it captures an image of my presence though the shadow that I cast on the sand below the walkway. Thinking about the way we record our presence, and by that I mean how the individual records their presence not how the individual's presence is captured by others, I feel this photograph nicely demonstrates how I extended my vision first of all, by being able to see myself (my shadow), and then by photographing it and seeing my image cast on the sand and then framed by the window of my cameras' digital screen.

These thoughts lead me to the requirement of more reading, so I will do just that.

The First Tentative Steps into Blog-World.

The intention for this blog is to sketch out my ideas concerning the cinema, combining my academic research and personal thoughts. I have been studying part time for an Msc in Film Studies at the University of Edinburgh for 16 months now and I only now feel like I'm starting to think like an academic - though I could be wrong about that too. Beginning a blog is something I probably should have done ages ago, I love communicating and I talk a lot, as my friends and family will testify to! I have been wary of getting my academics pursuits out in the open though and have kept them safely within the boundaries of essay writing and discussions with my fellow students. Now is the time to fully embrace online publication and be brave in this new decade, to move on (but not away from) writing with my Imperial typewriter.

This week I have read the last chapter of Cinema 1 by Gilles Deleuze and the first chapter of Cinema 2. I continued to read After Photography by Fred Ritchin and I began reading An Introduction to Metaphysics by Henri Bergson. My reading on the side is Swans Way, the first book in Marcel Proust's six volume novel, In Search of Lost Time.

Recently my interests have been moving toward issues of analog versus digital photography and film, hence my picking up Ritchin's book which is an accessible discussion of the implications, both positive and negative, of the so called 'digital revolution'. Starting this blog makes me feel a greater acceptance of the positive side of digital developments! Ritchin picks up where Roland Barthes and Susan Sontag began in addressing the way photography has transformed the way we think about the world and how we conceive of ourselves and our lives. We have moved far passed the issue of image manipulation that began with the act of posing for the portraitist, manipulating our expression and posture for that best version of ourselves. What we have now are hundreds of different versions of our image available to view through social networking sites so that we don't need that one perfect shot, we can always upload another photograph, maybe a different pose or the same one repeated on every night out in the pub. We interact with images now, click on one and it leads you to another in a simple gesture demonstrative of the way technology develops endlessly towards convenience.

Images on the internet are like any information that's available to view, just like this blog which is another form of communication. The difference that Ritchin talks about is that we have come to expect information from the source, rather than to request it. Information is a basic right, now that so much is easily available online. This is one thing that bothers me about Facebook, that I may have 'friends' whom I don't ever interact with but I am able to view their activity and see images of them carrying on with their lives, without having to ask, "How are you?"
This is all carried out through our computers of course, we look at the screen and search for what we want, look at images and videos and have online conversations. We have an identity in the online world, conceived of through factual data; age, gender, date of birth, and through our projection of our personalities in the choices we make and personal information we put 'out there' on the web.

I checked out Henri Bergson on the advice of one of my professors, as Gilles Deleuze had based his writing on Bergsons' theories. An Introduction to Metaphysics is a fairly intimidating title but having read some Deleuze, and in thinking about issues of perception and identity, I could almost get to grips with what Bergson was saying. How do we conceive of ourselves? That is the important question here, and I feel my concerns may be, how does the cinema conceive of us? How do we conceive of ourselves through the cinema and the various other screens we interact with?
'There is one reality, at least, which we all seize from within, by intuition and not by simple analysis. It is our own personality in its flowing through time - our self which endures. We may sympathise intellectually with nothing else, but we certainly sympathise with our own selves.'
-Bergson (8).

I'm going to have to leave these questions hanging here. In terms of our online selves and the one reality that we can truely know, Bergson would consider the internet to be a secondary, imperfect perspective, as it digests information and reduces it through analysis, 'we are not dealing with real parts, but with mere notes of the total impression.' (24)

I hope that through this blog, my writing and my ideas improve and develop, and I appreciate any constructive criticism readers may have to offer. At the moment I'm aware of my naivety in the face of new research and discoveries!